March 22, 2011
I went to see 'I hate love stories'. But somehow could not. Instead I ended up seeing 'Karate Kid'. Awesome movie, I must say. I am sure now God has better plans for my life's movie than the plans I have made.
Jackie Chan is just stupendous. On rare occasions, I fall in love with a man and I fell in love with him. The movie has romance, action, music, comedy, emotion and is, a complete movie indeed.
The story goes like this. 12 year old Dre Parker lands up in China because of his mother’s career move. The Detroit kid has bad experiences from the very beginning, starts hating China and wants to go back. His only interest in China is his classmate Mei Ying and they form a Mutual Admiration Society. But because of her he makes the class bully Cheng his enemy. Cheng gives him a tough time with his expertise in Kung Fu.
Dre finds a teacher/trainer in the Kung Fu master Han who is basically a maintenance man. Han teaches Dre that kung fu is not about punches and parries, but maturity and calm. Once Dre gets seriously injured in a fight with Cheng and Han mends Dre's injuries using fire cupping. They go to Cheng's teacher, Master Li, to make peace, but the brutal Li, who teaches his students to show no mercy to their enemies, challenges Dre to a fight with Cheng. Han accepts the challenge unwillingly. Dre realizes that facing the bullies will be the fight of his life.
Han begins training Dre, but Dre is frustrated that Han makes Dre spend hours taking off his jacket, hanging it up, dropping it, and then putting it back on again. Definitely it is the most hilarious scene of the movie. After days of this, Dre gives up until Han explains to him that the jacket exercise is his way of teaching him defensive block and strike techniques.
Once Dre finds Han drunk and sad, he learns that it is the anniversary of his wife and daughter's deaths, which occurred years ago when he lost control of his car while arguing with his wife. Dre reminds his teacher Han that one of his Guru’s lessons was in perseverance . So Han needs to heal from his loss and let the past bury the dead.
The tournament begins. Dre delivers impressive blows, but Cheng counters with a devastating strike to Dre's already injured leg. Dre adopts the one-legged form attempting to use the reflection technique to manipulate Cheng's movements. Cheng charges Dre, but Dre spins, and catches Cheng. He kicks Cheng and not only wins the tournament, but also the respect of Cheng and his classmates.
Dre has made his teacher proud.
The lessons
Movie lesson 1-A teacher is a human being too and can sometimes break down in front of a student
Movie lesson 2-A teacher not only teaches but also learns from the students
Movie lesson 3-A teacher-student relationship can be such a beautiful emotional bond
Movie Lesson 4-Sometimes the students misunderstand the teachers intentions for using a particular method
Ultimate Lesson-It reminds me of a Japanese proverb "Fall seven times, stand up eight." NEVER SAY DIE 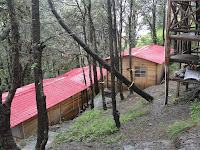 Dr Amit Nagpal is a Personal Branding Consultant with a holistic touch. To know more about him click here:-
http://www.dramitnagpal.co.in/p/about-us.html

He may be reached at amitknagpal@gmail.com
behavioral coaching inspirational life skills training the karate kid