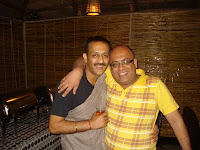 Some people come in your life for a reason, some for a season and some for a lifetime. Some people leave impressions on you which last a lifetime.
I joined WLC in July 2009 as a good teacher and an average manager. And then came Col Katoch in March 2010 as Director and our relationship began on an insecure note with a little friction, when a few days had passed and he told me in front of my team that my department was not doing a job worth merit or distinction but was barely on the verge of passing. My self-respect got hurt and I took it as a challenge.
And my development as a manager began. I had a mental barrier that I was fundamentally creative and I could never become an excellent manager. The barrier crumbled soon. I was deeply influenced by the process orientation which was introduced to me by Capt Ved Singh and Col Katoch. I realised management is all about defining processes and ensuring that process are followed in a sequential manner with minimum exceptions.
The next thing on his mind was to teach me how to utilise the time quadrant in real life and how to classify activities on the axis of urgent and important. He also taught me the 4D concept, which implies that whenever you get a task, use the Dump, Delay, Delegate and Do formula. Dump if the work is futile, Delay it if not urgent, Delegate it and finally do what is urgent and important as a priority.
Col Katoch always spoke about integrity and it touched my heart. The question of marketing being more about manipulation was already there in my mind and my increasing spiritual inclination was adding to the trouble. His constant talk about integrity made me decide that I have to shift slowly from Marketing to Spiritual Leadership.
Another of his favourite topics is willing compliance. He made me realise that willing compliance only can attract quality work from employees and pressure (without willingness or willing compliance) can only force quantity of work which would be half-hearted. He has always emphasised that willing compliance will result in willing participation.
Thank you Katoch Sir. You have Touched, Moved and Inspired.
(Originally written as farewell speech)