How can I Become Courageous?

March 22, 2011
‎'I do not want to crawl; crawling is tiring & I am ready to die to learn flying'.
(Lessons from butterfly)
Courage is almost a contradiction in terms.  It means a strong desire to live taking the form of readiness to die.  ~G.K. Chesterton


I always say, "The one who is used to walking on the thorns, is the one who can take the bull by the horns. The one who gets the best of the best often goes through the worst of the worst."
What is courage after all? Is it just lack of fear or a spirit of adventure? Is courage the strength to walk the off beaten track or to walk alone? Is courage standing up and speaking out your mind or is it small routine things like tolerating a bad boss for the sake of family duty?

According to Wikipedia, "Courage or bravery is the ability to confront fear, pain, risk, uncertainity or intimidation. Physical courage is courage in the face of physical pain, hardship or threat of death while moral courage is the ability to act rightly in the face of ppular opposition, shame, scandal or discouragement."
We unconsciously transfer energy to the object of our fear. Why energize what you don't want? Better to focus on what you do.
Nithya Shanti
Everyday we need to question ourselves, "Are we living a life of courage? Are we living fully? " Leboff says, "Every day, ask yourself what you've done today that is daring or that is a bit of a stretch. If at the end of each day you can find just one thing, then you are moving, but if not, then you are getting more and more limited and your horizons are getting smaller and smaller."
Are be basically courageous or timid is a big question? We act courageious in certain situations and have unjustified fears and phobias at the same time. My mentor Dr Daisaku Ikeda says, says, “The tendency of human beings is to try and escape challenge and seek an easy and peaceful environment.” Does that mean we are basically timid or there is a hidden courage inside all of us which needs to be brought out?
The soul attracts that which it secretly harbors; that which it loves, and also that which it fears.~James Allen
From where does the courage come? It comes from soul, it comes from emotional strength and sometimes it comes from the heart when the inner voice says, “I have to do this even if my life is risked in the process.” We must remember that strength is a victory in itself. In a struggle we may win or lose but our continuing to struggle is a proof a victory as a human being.
Mark Twain has said, "Courage is not the absence of fear. It is acting in spite of it." The sign of a courageous person, then, is someone who feels fear, recognizes fear and still goes on to do what he or she believes is right. “Dar sabko lagta hai. Gala sabka sukhta hai…..Dar ke aage jeet hai.” (Everone has fears, Everone gets a dry throat, Victory lies ahead of fear) So true. In fact, a timid person is frightened before a danger, a coward during the time, and a courageous person afterward.
Nichiren Daishonin, Buddhist teacher gives a wonderful example of consistency in courage, “The Lion King is said to advance three steps, then gather himself to spring unleashing the same power whether he traps a tiny ant or attacks a fierce animal.” A good lesson which we all need to learn from dear lion king.Courage need not be glorified all the time. There can be courage in small things of routine life. Mary Anne Radmacher says, “Courage doesn't always roar.  Sometimes courage is the little voice at the end of the day that says I'll try again tomorrow.”
Is courage something inborn or it can be developed is a critical question? If we constantly do the thing which scares us, we tend to come out of the fear and develop courage to do that activity. The only way to develop courage is to consciously and continuously make a habit of confronting our fear, of treating every fear-inducing situation as a challenge and as an opportunity to become stronger, more resolute. As they say, “Do the thing you fear and the death of fear is certain.” Psychologists call this the process of “systematic desensitization.”
If you see your situation as one giant obstacle to conquer, it will appear threatening to you. On the other hand, if you look at it as small pieces of a greater whole, the task to complete and work on it piece by piece seems easier to grasp and you are likely to accomplish your goal.
There was an expedition in the early 1920s, led by Mallorey. In spite of their great preparation for the worst, they failed two times to conquer Mt. Everest. Finally during their third expedition, Mallorey and most of the crew were killed in an avalanche. When the remaining crew returned to England, they were saluted in a great banquet. There were pictures of all who were killed on the walls and there was also a huge picture of Mt. Everest on one of the walls.

As the leader of the remaining crew stood up to receive applause from the people, with tears streaming down his face, he looked at the giant picture of Mt. Everest and said: "I speak to you, Mt. Everest, in the name of all brave men living and those yet unborn, Mt. Everest, you defeated us once, you defeated us twice, you defeated us three times. But Mt. Everest, we shall someday defeat you, because you can't get any bigger and we can.” Wow what a moving story of human courage. I can, i must, i will should be our spirit.
A good source of courage is faith in God, supreme consciousness or the god within all of us.The Bible presents many such examples of people who acted courageously in the midst of troubles.  Isaiah 40:29-31 says: "He giveth power to the faint, and to them that have no might he increaseth strength. Even the youths shall faint and be weary, and the young men shall utterly fall, but they that wait upon the Lord shall renew their strength." The courageous don't live forever, but the timid don't live at all.


Do not look for excuses to justify your fears for where there is a will, there is a way. Even if it is not there, it can always be carved.  There is a nice Russian proverb "The church is near but the road is icy; The bar is far away but I will walk carefully."
Let me share a joke. Once a question was asked in the examination, ‘Define courage’. A candidate wrote, “This is courage” and returned the answer sheet blank.


Quotable Quotes
“It is the weak who are cruel. Gentleness can only be expected from strong and courageous people.”
Leo Roskin
I asked "So what are you doing these days" He said, "Trying to write my own destiny"
Dr Amit Nagpal 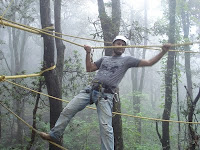 
He may be contacted at amitknagpal@gmail.com