Its All In the Mind 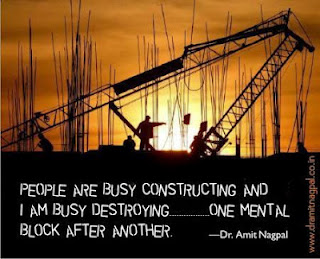 I do not fix problems. I fix my thinking. Then problems fix themselves ~ Louise L. Hay

Why did God place the brain on top of the body, then the heart and then the stomach. It denotes the hierarchy of importance. The mind is so powerful that it controls all the body parts. Here are a few examples to understand the power of the mind.

Once a lady who was having severe knee pain went to a sage and complained of her sister and how she had been seriously harmed because of her. The sage asked her to forgive and remove the grudges from her mind. She told the sage that if the sage were in her position, he would not have been able to forgive her, so serious was the harm and hurt caused. The sage had to make lot of effort to convince her that by keeping grudges and not forgiving her sister she was harming herself. Finally she was able to forgive her sister and as soon as she forgave, her knee pain started disappearing.

Col Katoch, our college Director shared a similar incident on power of the mind. A life skills camp was going on in the college where students were encouraged to release their emotional blockages, share their feelings openly and let go of their grudges and guilt. A student shared her experience of how her family desperately wanted a son but she (a daughter) was born. She grew up hearing stories of her family’s desire for a son and started behaving like their son to fulfil their longing and make them happy. This went on for years and because of the constant desire to be and behave like a male, she had developed male hormones.

Life is a game of boomerangs. Our thoughts, deeds and words return to us sooner or later with astounding accuracy. -
Florence Scovel Shinn

Happiness and sorrow both are controlled by this powerful force called mind. If you can master your mind, the world fill fall at your feet. But it is more difficult than we imagine. Dr Daisaku Ikeda, Buddhist Leader says, “For one who has conquered the mind, mind is the best of friends, but for one who has failed to do so, their very mind is the greatest enemy.” So once we have discovered real peace of mind, then many other discoveries will begin.

Raj Bapna (Mind Power Resaerch Institute, Ahemdabad, India) has written an interesting book on Mind Power. In Vedas, mind is considered only an instrument of receiving knowledge and mind is not supposed to contain knowledge. The knowledge is contained in the intellect (which is a sublime body) and is transferred to the next body after reincarnation. That is why some people remember some past birth experiences.

Meditation, prayer and positive thinking is a great combination for making your mind your best friend.

“You can make hell out of heaven and heaven out of hell. It’s all in the mind”
John Milton