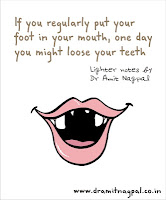 As a child I would often put my foot in my mouth due to my innocence and politically incorrect statements. One day I decided enough is enough and decided to keep my mouth shut. Once in a while, when I had something really powerful to say, a quote, a joke, a wisecrack, then only I would open my mouth.

After few months I realized, all my relatives started saying, “See Amit is so wise, he speaks so less and whenever he speaks it is something worth listening.” I gained two advantages by speaking less; one is the reputation of being wise and secondly a loyal audience whenever I had something to say. It is rightly said, if speech is golden, silence is platinum.

People generally tend to be good talkers and poor listeners. Probably we are sure of our own wisdom and doubt the wisdom of others. Often we act as if we are listening while we are lost in our own world. A quote goes, “Small people do the talking, big people do the listening”
I have also experienced that we talk too much when we lose control over ourselves due to either excitement or insecurity. Silence shows we are in control though some people, bubbly by nature believe that talking is a way of showing and spreading happiness.

Deep listening is miraculous for both listener and speaker. When someone receives us with open-hearted, non-judging, intensely interested listening, our spirits expand.
Sue P. Thoele

Listening improves our personal and social relationships. Only by listening to the customer, a salesperson can understand his true needs. Wives often complain, that their husbands do not listen to them anymore and only act as if they are listening. Rachel Naomi Remen rightly notes, “The most basic and powerful way to connect to another person is to listen. Just listen. Perhaps the most important thing we ever give each other is our attention.”

Successful people are generally effective listeners. Sam Walton, founder of Walmart, once landed his plane in Texas and instructed his co-pilot to meet him hundred miles down the road. He then boarded a Walmart truck to chat with the driver on the way to understand ground realities.

So today itself tell your close friend or relative that you want to listen to his/her version of life and experiences, listen with empathy, respond periodically and see the relationship transform.


The best thing you ever said, was said without words.
Nithya Shanti


Dr Amit Nagpal is a Personal Branding Consultant with a holistic touch. To know more about him click here:-
http://www.dramitnagpal.co.in/p/about-us.html