Manager as a Single Parent

March 22, 2011
You must have wondered at some point of time, why God gave us two parents. Do children who have a single parent have a normal upbringing? Or does such imbalance affects them. Traditionally father’s role was about discipline and mother’s role was about nurturing but it is not unusual to find role reversals these days.
A manager as a mother nurtures his subordinates, is very patient with them and encourages them to share their problems and ambitions. A manager as a father disciplines and at times uses negative motivation (challenging the subordinate by saying you cannot do it). Assuming that an average human being needs both carrot and stick, the manager as a mother provides the incentive of carrot and the manager as a father provides the fear of stick. The proportion of carrot and stick required varies from person to person depending upon his self-motivation, education and maturity levels.
It is a matter of debate whether a manager can play the role of both the parents or the immediate manager should be like a mother and higher one in hierarchy like a father,
A friend told me, I always had a father and a mother but yet I never had parents, since they were fighting all the time and never had coordination between them. Similarly sometimes employees can become victims of the clashes between managers which can be a very difficult situation to handle.
The traditional reverence and authority of leaders over subordinates is now being replaced with the servant leadership theory. But while the leader becomes the ‘first among equals’ subordinates must develop maturity levels and not cross their limits. A manager like a parent can pamper the subordinate once in a while but also teach him discipline which is good for the subordinate. I have often been told , "Given an option, I would prefer a strict boss over a lenient one." It makes them commit fewer mistakes and makes them more professional.
Needless to say, that in return for the parenting and mentoring received from the manager, a team member should also have a sense of duty and loyalty towards the manager. 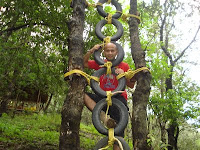 
Dr Amit Nagpal is a Personal Branding Consultant with a holistic touch. To know more about him click here:-
http://www.dramitnagpal.co.in/p/about-us.html