For Day 6 of the 3E Story Blogathon, Paul Copcutt shares the priceless nature of Brand You. Paul's post inspires the readers to take risks and act as intrapreneurs in the organisations. As his profile also says, "He works with executives, managers and teams for leading Fortune 500 corporations helping them to think entrepreneurially while acting corporately." 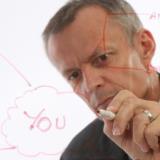 In the recession of the late 80’s and early 90’s I had just been downsized for the second time in my corporate career in the consumer goods industry. The payoff was minimal and I was living on $250 a week government assistance. Also I had taken in a lodger to help cover mortgage payments and was using public transport to go to sales interviews. The outlook was, to say the least, pretty bleak.

I decided that I needed to gain more stable employment in a growth industry and identified healthcare as almost recession proof. Having spent several years in sales and marketing recruitment. I put all my training and own coaching advice about informational interviewing in to practice. However I was quickly told by everyone I spoke to that to break in to the medical industries in the early 90’s that you needed a solid track record, science qualifications and a degree. I was the complete opposite with ten different employers on my resume, had left school at 18 under the threat of expulsion and my science teachers had labeled me as an idiot with an E grade average…………….

Three and a half years later I was leaving an already successful medical device sales position to join, as employee number 29, a rapidly growing UK biotech firm as National Sales Manager. I hired a non-scientific sales team, launched the company’s first commercial product in the world and two years later was involved in the Canadian launch as part of an international corporation with a market value of several hundred million dollars and almost 1,000 employees worldwide.

At one point, I was even (at least on paper) a millionaire. Eventually the company sold off its commercial success’ for $100 million dollars, returned to its R&D roots and closed its North American offices. As a result of these experiences I decided to dedicate the rest of my professional life to helping others realize their own career goals.

It was not until a couple of years later that Tom Peters coined the phrase “The Brand Called You” in his Fast Company magazine article and we all started to become much more aware of the term personal branding.

I am always noticing that many people in business have great experience, skills and attributes, but aren’t always able to present or promote them in the best possible light or sometimes fail to gain access to the right audience. Which means that they do not progress as well as they expected, or they miss out on opportunities to switch to something they really want to do.

The more that professionals can clearly identify and communicate their unique value and develop, grow and protect their personal brands, the more they enjoy greater professional recognition, boost their incomes, gain deeper personal satisfaction and understanding and achieve more for themselves and others.

I still have the stock options piece of paper that at one time was worth over a million dollars. Now I consider it priceless because it constantly reminds me of the opportunity that branding yourself can bring you. The opportunity may disappear but once defined and worked on your personal brand will always be with you, after all IT IS YOU.

---------------------
Paul Copcutt, Personal Brand Architect and Chief Square Peg has never quite fit in the normal template. Now a sought after personal brand speaker and media resource he has been featured by Forbes, Money, Reuters, the Wall Street Journal and Elle. Paul works with executives, managers and teams for leading Fortune 500 corporations helping them to think entrepreneurially while acting corporately.