May 03, 2013
Click here to add this blog to your feed and you will not miss out on any story

For Day 3 of the 3E Story Blogathon, Michael Thallium shares a unique post on the power of our beliefs, the maps that exist in our mind and how they stop us from uncovering our inner greatness. He rightly says, "Any person who wants to understand and empower people has to pay attention to both his own set of beliefs and the different sets of beliefs of people around."

When you look back at the history of mankind you can’t help but realise how important paradigms are. I first heard of paradigms when I studied Stephen R. Covey’s teachings on how to become a more effective and greater person. It had been many years earlier that Thomas Kuhn, in his book The Structure of Scientific Revolutions, first introduced the concept of “paradigm shift”: rather than solely making progress in linear and continuous ways, the scientific fields evolve thanks to paradigm shifts which open up a whole new world of approaches to understanding what had never been considered valid before.

I must admit that talking about “paradigms” may sound too scientific, too rational, for some people. That is why I sometimes avoid that term and talk about a “set of beliefs in our brains”. We are what we believe we are and we see the world through the eyes of our beliefs, through our minds’ eyes. There is also this dichotomy between, so as to say, Rational Thinking (mind) and Spiritual Thinking (soul) traditionally associated with Western and Eastern cultures respectively. I think that is a fruitless dichotomy. In the end it is the profound understanding of our different sets of beliefs what wins regardless of whether you call it mind or soul.

Take a present map of the world today and compare it with the different maps of the world that have been before in history, compare the different projections and perspectives. If you do this exercise you will realise how narrow minded we are, when it comes to understanding people and the world. 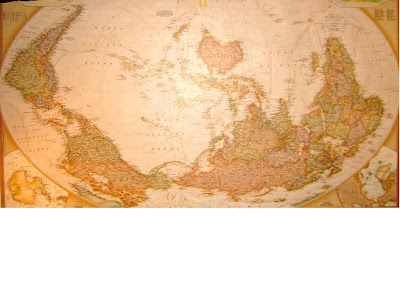 I am not advocating for a scientific thinking neither mocking a spiritual thinking. However, I lately have come down to an interesting realisation. The history of mankind has been that of the history of ignorance. Human beings have tended to assign “supernatural powers” to everything that could not be understood. There were “ghosts” everywhere... We saw “ghosts”, we still see “ghosts” there, where things are hard to fathom... Well, ghosts do not exist!

Any person who wants to understand and empower people has to pay attention to both his own set of beliefs and the different sets of beliefs of people around. Then you will have to elaborate a new map of the world -a more global and respectful map that can lead you to the lands of greatness- and make sure that this map will take you there where you want more effectively. And we can use our brains to do that.

Ghosts don’t exist, brains do! Tweet This
---------------------
Michael Thallium is a Global and Greatness Coach based in Spain. Michael has spent many years of his life traveling around many countries and continents, sailing the seas and flying the skies all over the world. Since 2008 he is dedicated to his passions namely coaching, language & communication and music. He believes in the greatness of people and his vision is to help others find their greatness globally.  He has done different jobs including translator/interpreter, au pair, tourist entertainer, language consultant, PR manager, assistant cruise director,  singer & musician, shore excursions manager, international sales manager and hotel manager.  Learn more about Michael here.
-------------------