(Global Thought Leaders who have Enlarged, Excelled and Evolved into Global Personal Brands) 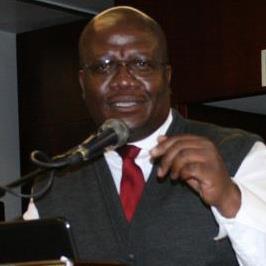 Dr Amit Nagpal-Tell us something about Centre for Courageous Authenticity in leadership.
Goodnews Cadogan-The Centre for Courageous Authenticity in Leadership was born out of my experience (shared with that of my co-directors, Ms Vuyokazi Menye: CIO at the Mondi Group & Ms Ntombekhaya Dayimani, Supply Director at Sandoz Pharmaceuticals) with many leaders displaying lack of courage to execute their mandate, in the face of resistance. On the other hand, they fail to ‘come-out’ and be who they are, and decide to blend-in with the dominant systems of their organisations, however toxic they may be.

Our mission at the CCAL is, through our quarterly advocacy seminars, to raise the level of awareness of the contribution of lack of leadership courage, to the ineffectiveness of leadership in organisations, whereby they limit the growth potential of organisations they serve. The second aspect of this opportunity gap lies in the opportunity to transcend current transformational challenges at an individual level and at other levels of existence in their organisations (team, clusters, business units and enterprise-wide). In South Africa, organisation transformation, in the context of our divided past, in the form of selective access to opportunities, on the basis of race, gender and other socio-economic factors, including adverse conditions for the disabled.

Economic development at both micro and macro levels is still limited by the subtle filters through which the large population of previously disadvantaged (and most would argue, that they are still disadvantaged) is viewed by those who still play a major role in decision-making, and choices large organisations make regarding product and service offerings. The few who make it to the top of these influential organisations, still do not emerge unscathed, for they lose their own authenticity, in their quest to fit-in. The sum effect of this, you have a large number of leaders who lack the courage to take the calculated risks to grow their businesses. They even lack the courage to take the people risks that would allow emerging leaders to operate to their full potential ~ no one is ever ready, according to this status of affairs!

Apart from raising the level of awareness regarding lack of courage and authenticity in leadership, we are busy designing programs that would allow the current crop of leaders, both experienced, and the new-comers, to own and transcend the debilitating fear that they have, so they can operate at full potential, and never fear to come out, for the benefit of their organisations. This applies equally to private sector (profit-driven) organisations, public sector (public and social services delivery-driven), non-profit organisations, as well as co-operatives, including government in its various forms.

It is our aim to be a fully-fledged private University within the next five years, offering advanced studies in courage & authenticity, and offering Research Fellowships sooner, to practicing and retired leaders and professionals.

Dr Amit-How do you facilitate change at an individual level?
Goodnews-The way I facilitate change at an individual level is through intimate support to executive leaders and young professionals (leadership coaching). This is driven by a 360 degree leadership assessment, with contributions by the leader, peers, team members they lead, the boss and the boss’s boss. Through conversations and these results, I am able to guide the leader to look within for solutions to their challenges. Furthermore, I guide the leader to look deep into their preferred leadership behaviour, as well as their underlying assumptions about self, people, systems and the task achievement capability.

Over a period of 12-18 months, I am able to work with the leader to overcome some of the hurdles that prevent them to be who they can be, in dealing with both people (relationships) and (task) achievement challenges. I encourage them to read widely, and communicate their intentions for their journey openly, so as to be able to create an enabling environment where feedback becomes fuel for their personal transformation journey.

Dr Amit-Share some interesting experiences you had with clients especially in individual change and conflict resolution.
Goodnews-It is the shock with which the leaders receive the feedback that comes from the environment in which they operate, and the way they react to it, that fascinates me. Most want to give up & externalize the challenges thrown at them via the structured feedback I give, by attributing most of what does not work, to others. They go through the various stages, similar to those that human beings go through when faced with a terminal condition or death (Elisabeth Kubler-Ross):
Denial & Isolation
Anger
Bargaining
Depression
Acceptance

My facilitation process involves getting them to the Acceptance stage, and accepting that what they go through at that point, is purely human, and for them to get through to being High Performance Leaders, they have to transcend the feedback from the environment, and go for whom they could be, based on their human potential.

It is when they arrive at the point of acceptance, and start to reflect on some of their own experiences, and revelations, that I get the most joy out of my work. In quoting one leader, they said: “In the whole of my career life, I have never had to look at my leadership journey in this way- I thank you Goodnews, for helping me to see”.

I have started to work with dysfunctional teams, and through the process of discovery, they emerge to be one of the best executive teams, being brutally honest with each other, without harming each other’s self-esteem. It is when the team gels, and starts to deliver beyond the constraints of their individual egos that I get to feel overjoyed for the role I have played in facilitating their transformation. It is even higher levels of joy when they get to value the role they play in both their organisations, and the communities they serve.

My role is to offer all of the abovementioned programs and solutions to our clients, at various levels of organisation existence, from individual coaching to enterprise-wide program management initiatives. It is my role to perform business development initiatives, as well as public speaking, writing of articles, and representing my company in professional organisations.

This extensive network of strategic foresight practitioners enables us to advise governments and business leaders and to inform the public about future patterns, trends and choices from inclusively global (rather than exclusively Western) perspectives. Thus the work of the AFI attempts to counterbalance the prevailing Eurocentric paradigm of civilizational progress pursued within the guise of industrial economism (including its associated beliefs, ideologies, values and assumptions) that still underpins most global policy initiatives and which we believe to be fundamentally flawed.

Dr Amit-Tell us something about your interest and contribution in climate change.
Goodnews-Climate Change became part of my interest as a result of sustainability being one of the most important parts of leadership. I built a strong network with various experts who contribute one way or the other, to global climate change thought-leadership.

I advise my clients and link them up with sources of business intelligence, to inform their long-term strategies through the work I do with the Asian Foresight Institute. Locally, I participate in the structures and coalition organisations, to add to the national debate on climate change.

Thanks a lot Goodnews for sharing your wonderful knowledge and experiences. It was a pleasure interacting with you.

* "World is one family" in Sanskrit
--------------
Brief Profile
Goodnews is an executive leadership coach and helps his clients to focus on finding solutions within, rather than finding fault with the environment. The ultimate goal for him is to create high performance leaders, teams and organisations that contribute to the transformation of the South African economy.