Give Respect, Get Affection; Give Affection, Get Respect

January 23, 2011
A Simple Approach to Relationships
I shall forever remain indebted to Subrata Roy and his company Sahara for what I learned during my four year stint. I have had high respect for Japanese management style of equality but I still found myself a misfit in Sahara’s Japanese ways.

Subrata Roy has written a book called ‘Sukh, Shanti and Santushti’ (Happiness, Peace and Satisfaction). There are few quotes/statements from the book which have left an indelible mark on me. He says, “Respect your elders/seniors and you will get affection, give affection to your younger/juniors and you will get respect.” No doubt it is common sense, but alas humans have to be reminded constantly of simple principles of life we conveniently choose to forget. He says no human relationship in this world is a relationship of equality. Even in a close friendship one person tends to dominate the other. And the one who dominates is respected and the one who is dominated gets affection in return. And about self-respect Subrata Roy says, “A person who respects himself will never be disrespected.”

Parent child relationship, teacher student relationship, boss subordinate relationship and mentor mentee relationship are good examples where one gets affection by giving respect. Subrata Roy says, “No one does anything for anyone, only for the self. We either do something to return what we got (to satisfy our own conscience) or we do something to get something in return.” This statement was a real eye opener in the days when I was an emotional and romantic fool.

In today’s corporate environment, the respect affection relationship between boss and subordinate is missing. On one hand the productivity levels are very high and on the other hand, the rate of burnout is equally high. People with high capacity for stress and high levels of independence only can only grow in such organisations while emotionally not so strong can feel misfits. If we want a mentor, an anchor we have to find the right person and attract the vibes of affection by giving the vibes of respect. If we are strong and independent and can fight our own battles all the time, then and only then we are fit for such environment.

I remember Alvin Toffler’s book ‘Future shock’ which talks of huge divide in future in the society, between people who want very fast lifestyles on one hand and people who want very slow lifestyles on the other hand. Similarly we will have a society hugely divided with very emotional and very logical, very westernised and very eastern in the days to come. And these subcultures will have to have separate identities as they will not be able to adjust with each other.

If you have an attitude of looking at the half glass full there is a lot to learn from Subrata Roy Sahara.

Excerpts from Outlook magazine “India's Weirdest Worker, Sept 8, 1997”
“As a rebellious youngster, he wanted a mobike. His mother was against it, but he finally got his father to buy him a second-hand, dilapidated Jawa, that would turn comatose at the slightest pretext. Others would have sacked it off, but the stubborn Subrata mastered it, by learning every little thing about the machine's innards. Today, he scoffs at '90s Hell's Angel wannabes: "They don't even know how to change a spark plug!"

“Roy isn't looking for managers, he wants men.”Emotions," says he, "are the key to corporate success." All talk about dissociating emotions from the workplace is hogwash. There are three kinds of insecurities that drive men: physical, financial and emotional. Conventional businesses tell employees to leave their emotions back home. This, says Subrata, is wrong, as you then get an incomplete man on the rolls. He believes that instead of breaking the emotional cord that binds the man to his family, the organisation should give the man a chance to become a part of a larger, corporate family. A family where all his emotional needs and insecurities are taken care of.” 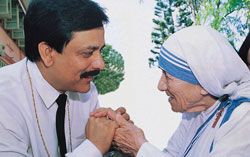 He may be reached at amitknagpal@gmail.com