This is a monthly column on becoming a great human being and has two opinions on the subject from western and eastern part of the world namely Michael Thallium from Spain and Dr Amit Nagpal from India.

I would say we all create since we are born. And I do believe it is impossible to live without creating: just the very act of living, of being, is creative. However, I am not going to focus on that kind of creativity we all have, but on that creativity which is acknowledged by others. Let me explain it! I consider myself quite a creative person, and as long as it helps me feel better, it is worth it. Nothing to say about it! But many times my creativity only serves me, not others. And if it doesn’t serve others, then it will rarely be acknowledged. Either you like it or not, we all live in a society and, unless you are an anchorite or a hermit, we all need others’ acknowledgement to some extent. So, this kind of creativity I am talking about consists of three elements: imagination, innovation and service. This kind of creativity involves others, not only you.

You can be very imaginative, but if you do not add innovation, you will remain in a world of fantasy and, most probably, you will be there alone; and if you are imaginative and innovative but you do not serve others, then no one will know about your creativity. I would like to remind you that the patent offices in different countries are full of inventions which have no use for most of people and, therefore, no one pays attention to them.

So, does it mean that painting, writing, playing music or doing any other thing just for the sake of it it is no use? Of course not. What I mean is that when we add the “service” element to our creativity, we are communicating with others and we have more possibilities to show our greatness and, even more important, help others discover theirs. In the end, this is what is all about: becoming greater human beings.

We can have a world full of creative people, but if their creativity has no use, that is, if it does not serve others, then we are mere collectors of loads of creative things and that’s it. As I said at the beginning of this article, we cannot live without creating. However, what I did not say was that we are creative but, unfortunately, we are not aware of it most of the time. Our awareness about our creativity is very low sometimes. And just the fact of increasing that “creative awareness” would make us much greater. Have you ever thought about all those things you do on a daily basis? How would they change if you would jump over the bar of your limitations and be creatively aware of them? Imagine you are a high jumper who wants to beat a record, where would you set the bar of creativity?

The very premise of this series (Uncovering our Greatness) is that we are born great and we fail to recognise our greatness because we fail to uncover it (as we often fail to discover our life purpose or deepest passion).

Visual learning style involves the use of sight or observation for eg drawing, diagrams, demonstrations, displays and so on. 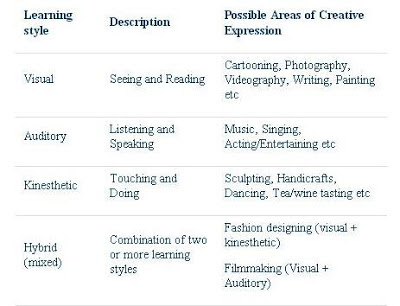 Where the hell has my creativity gone?
Once we have understood our learning style, we will also realize the likely areas of creativity for us to develop. Our creativity often gets suppressed or killed in the rat race due to clouded thinking created by pressures. Here is my story about how I lost and regained my creativity.

There are several ways of boosting or increasing our creativity. I have already written a post on this, which you can read here.

Bringing out our divine force (creativity)
There are mainly 2 schools of thought in religions/spirituality. One school of thought says that human beings were made by God is his/her image. God being the creator, we have creative powers too (though we are very often using them in destructive ways). The other school of thought says there is no God as such and there are different levels of consciousness (and God manifests itself in all life forms). According to this school, the higher the level of your consciousness, the more creative you will become (or more divine you will become).

So let your creative expression come out, let your imagination go wild and just remember what Einstein said, “Imagination is more important than knowledge.”

Are you ready?
Brief Profile
Dr Amit Nagpal is a Personal Branding Consultant & Global Success Coach. He is based in New Delhi, India and specializes in personal branding with a holistic touch. His philosophy is, "Enlarge as a Human Being, Excel asa Social Media Being and Evolve as a Personal Brand.
creative thinking creativity Dr amit nagpal good to great Michael Thallium two opinions Uncovering our greatness