Why Leaders/Managers must be Good Actors?

February 20, 2011
I believe, a manager must be a good actor. Readers must be surprised or may be shocked, on what is the relationship between managing and acting!

A manager is a human being too and will go through his own ups and downs of life. He will have his share of good and bad moods. He will be highly motivated at times and demotivated at times, because he also expects a pat from the boss, increments and promotions, which may come late or sometimes, not come at all.

Can he afford to show all these feelings and sentiments to his subordinates? Will it not create a chaos and the entire team being affected by the manager’s moods and motivation levels? Of course, it will and that is why a manager must be a good actor.

It is said, “If you are guided by mood, you will be guided to the doom.” And it applies a lot to managers. A manager must hide his true emotions, so that he can do his duty. In case, he cannot act anymore and things have crossed his tolerance levels, he must quit the job silently, rather than express his feelings to his subordinates and create chaos.

A manager who has been scolded badly by his boss has to come out of his room smiling. If he has a frown on his face, the team can make out what must have happened inside the room. I have heard many Japanese have a philosophy; whether you are happy or sad, keep smiling, don’t let your true state of mind be visible to people. A manager must be consistent and in some ways emotionless. If he has a natural smile in his face, then the smile should be consistent, if he has a serious & strong administrator look, the look must be consistent. A manager can’t afford to be too sensitive and emotional. In case he is, he must learn acting to hide such emotions. Once in a while inspite of his best efforts he will fail and his true emotions will become very much visible. But such a thing should not be frequent.

Working as a manager is a tough job in many ways. Whatever you do becomes an example for the team members. If one does not compartmentalise one’s personal and professional life, the team will also sit in the manager’s see saw and will be swaying in the highs and lows. A manager is not a god or superhuman and will have changing motivation levels. But if he is a good actor, he will be able to hide his lows and always show high energy and enthusiasm to his team. The team will have a very high level of respect for such a leader. And the morale of such a team will always be up, up and up. If you are poor at acting, you better go and join an acting school for few days.

But one must remember that acting is a short term solution as only authenticity works in the long run. Some situations where you hide your true emotions may be necessary though to get the respect of the team members. 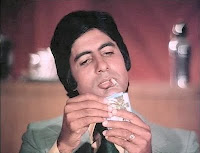 Dr Amit Nagpal is a Personal Branding Consultant with a holistic touch. To know more about him click here:-
http://www.dramitnagpal.co.in/p/about-us.html

He may be reached at amitknagpal@gmail.com