Meditation and the Sub-Conscious Mind


Why do most of the people start meditating to reduce stress rather than find joy? Does meditation have any benefits except stress management? Should we not meditate as a proactive measure to find joy and connect with our inner selves? Is there a scientific reason why people get inspirations and creative ideas during deep meditation? Has meditation got some relationship with the sub-conscious mind? These were some of the questions troubling me few years back and I began to search for answers.

The answers came from inside and outside. Inside means the inner voice which told me how was I getting transformed through meditation aided by shift in mindset. Outside means the scientific research which was validating my conclusions and experiences.

I started with the crudest form of meditation which is chanting. For two years the benefits were so inconspicuous and invisible that I hardly noticed the transformations. It was only after regular practice of chanting for one hour every day (along with clearing of negative energy and thoughts) for six months that my life was turned downside up and I became an advocate of meditation. Meditation had changed my life in every way possible.

Why was my lost creativity suddenly coming back or rather overflowing? Why were suddenly all the right people and circumstances coming in my life? I had too scientific a bent of mind and was now becoming balanced with faith in a higher power (or a supreme consciousness which was manifesting itself through all living beings). I began researching on the sub-conscious mind. I read ‘The Secret’ and found amazing similarities in it with Swami Sivananda’s literature on the mind. Why did Buddha say, “The mind which sees the limitation is the limitation”? There was something beyond the ordinary mind; call it sub-conscious, unconscious or the soul.

Spirituality and mind which seemed to be unrelated topics suddenly seemed to have a close connection. When I came to know of Centre for Spirituality and Mind at University of Pennsylvania School of Medicine, it jolted me further. How could I ignore such a simple thing that meditation calmed the mind and since meditation is a spiritual tool, spirituality had a close connection with the mind. I met diverse people from spiritual scientists to believers and many of them pointed out to interesting facts. Why did ancient church fund all the scientific research and discoveries? When did science and spirituality/religion diverge and became symbols of logic and faith or two opposing forces? 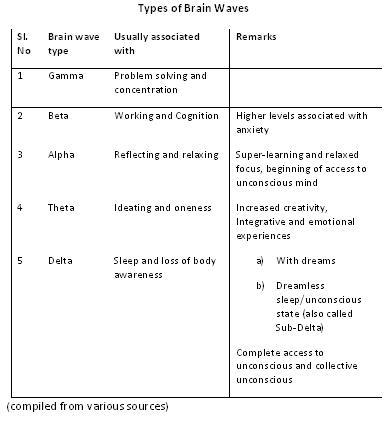 I was reading a book called “Authentic Personal Branding” by Dr Hubert Rampersad which talked of Theta waves and creative inspiration during meditation.  It made me even more inquisitive.

Then I came across several articles and images via Google which explained the types of brain waves and how Theta waves impacted the mind during meditation. Though there were slight differences here and there, but there was a broad agreement. 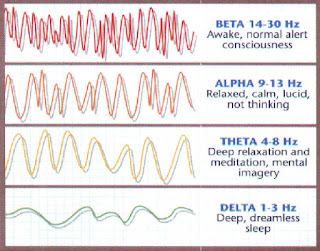 Andrew Newberg, Director of the University of Pennsylvania’s Center for Spirituality and the Mind, also talks of the mind-body connection in the movie "What the Bleep Do We Know." Studies at the center also looked at the brains of Tibetan Buddhists in meditation and Franciscan nuns in prayer. Both groups showed decreased activity in the parts of the brain (which deals with sense of self and spatial orientation — which also suggests the description of oneness with God (or Supreme Consciousness) sometimes experienced in meditation or prayer.

Then begins the sweet journey of creativity, joy, wisdom, intuition, awareness and in fact a point of ecstasy and oneness, where none of these matter.
(Originally published on http://spirituallounge.com/)
------------------------
Brief Profile
Dr Amit Nagpal is a Personal Branding Consultant & Deepest Passion Coach. He is based in New Delhi, India and specializes in personal branding with a holistic touch. His philosophy (Enlarge, Excel and Evolve) is, "Enlarge as a Human Being, Excel as a Social Media Being and Evolve as a Personal Brand"

(I express my deep gratitude to my mentor Sensei Ikeda & Bharat Soka Gakkai, for the mentorship and inspiration.)
meditation spirituality sub-conscious mind subconscious the subconscious