Beyond Goodbye- A Book on Simultaneous, Sympathetic Death 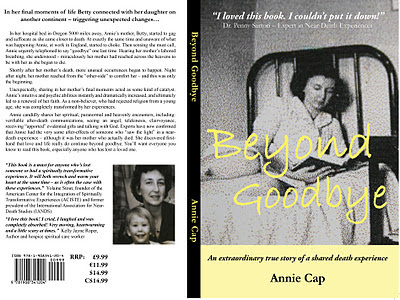 
In England, American counsellor and author, Annie Cap was unexpectedly overcome by the symptoms of her dying mother.

In her final moments of life, Betty, in a hospital in Portland, Oregon, somehow managed to connect with her daughter overseas. At work, Annie suddenly began to choke. Coughing uncontrollably and finding it difficult to breathe she was forced to ask her client to leave. She telephoned her mother’s hospital room and when her sister answered she could hear her mother’s laboured breathing in the background. Although Annie didn’t understand what was going on, she realized immediately what had just happened – her mother had mysteriously linked in with her (attempting to reach her one last time perhaps) and had caused Annie to feel her dying symptoms.

This led Cap on a trail of exploration, to not only understand how it was possible that she had shared in her mother’s death, but also to find out if this phenomenon had been scientifically studied and experienced by others. The answers were startling. After interviewing leading experts in the fields of end of life phenomena and near-death experiences, including Dr. Peter Fenwick, a world-renowned neuropsychiatrist and Fellow of the Royal College of Psychiatrists in London and Dr. Pim van Lommel, known for conducting the world’s largest prospective study of near-death experiences during cardiac arrests in the Netherlands, Cap discovered that she had gone through all the same after-effects of someone who had “seen the light” although it had been her mother who had died. While the intensity of Annie’s experience was considered rather rare, Dr. Penny Sartori, another UK expert in Near-Death Experiences said, “Not only has Annie revealed a fertile area for research into the after effects of empathic death experiences but she has also laid the platform for others to come forward and talk about their experiences.”

What happened to Annie is called, “a deathbed coincidence with direct linking,” “an after-death communication,” or, “an empathic or shared-death experience (SDE).” Regardless of what name is used for her experience, the results were the same; Annie’s life was changed forever. In Beyond Goodbye Cap candidly shares the amazing story of empathically experiencing her mother’s death, how she felt her mother touch her again afterwards and the many other startling and dramatic after-effects she encountered which experts say are all “normal” for any near-death experiencer – but Annie herself never died.