How, Together, Can We Co-Create a Peaceful, Prosperous Planet?

October 19, 2011
‘Two perspectives’ is a monthly column with two different perspectives from two different continents, genders and cultures on the same topic viz.
from Janet Smith Warfield (based in Florida, USA) and
Dr Amit Nagpal (based in New Delhi, India). 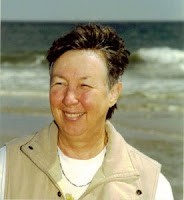 Janet's Perspective
Patriarchal systems are breaking down. Top down Communism no longer works. Top down democracy, bought by top down corporations, no longer works. Monarchies and dictatorships are being challenged and overthrown.

As women take back their power, men are waking up, too. They are beginning to respect the awesome female collaborative and cooperative power that can lead our entire planet away from war and violence and into global peace and abundance.

Together, we have allowed the major news media to shape our minds, thoughts and emotions. People are tired of a steady stream of violence, verbal abuse, and news about what’s wrong with the world. Good news media are springing up everywhere to replace the naysayers and spread good news about what is working. People everywhere are seeking a return to sanity, both in their personal worlds and their collective worlds. They are starting to think for themselves so they can release their fear and depression and start taking positive action to turn themselves and our world around.

There are two concepts that can help us understand what’s happening so that together, we can consciously co-create a world that works for all of us. One is holons. The other is Teihard de Chardin’s Noosphere. 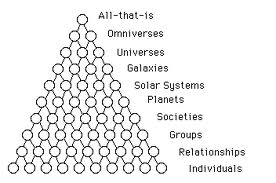 The first concept, that of a holon, can be represented by the image above. If energy is inherent within each circle, and each circle is its own complete system (whether an atom, a cell, a heart, a human being, a planet, etc.), we have a holarchy or perhaps pure democracy or pure communism. Alternatively, we have undivided wholeness, with power and creativity flowing in all directions, top down, bottom up, and all around. Each circle/system is connected to and nestled within other more encompassing circles/systems and all are involved in an energetic exchange that affects each and every part. The challenge is to align them and bring them into harmony and balance. For the past 2,000 years, this was done through patriarchy. How interesting that this image can also be viewed as a hierarchy when the underlying energy is flowing only from the top down.

The second concept is the Noosphere or Teihard de Chardin’s thinking layer of earth. If each miniscule part of a holon is complete in itself and yet connected to all other holons, then each is connected to every other holon at a thinking level beyond itself. The Noosphere might also be referred to as the Akashic Records or the Field.

There's a fine line between chaos and heaven on earth. That line is non-violence and awareness. It's a choice - for each and every one of us. 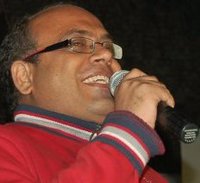 Dr Amit Nagpal's Perspective
Internet and social media is bringing us together on a large scale. The spreading of protests (Occupy Wall Street) on an international scale shows that people all over the world are facing similar problems and true globalization is about to begin. The mass media can ignore things at its own peril.

The major challenges in creating a peaceful and prosperous planet are cross border conflicts, languages and cultural differences and limited interaction (to understand and appreciate other perspectives. In my opinion there are four major tools we can use to make the world a beautiful place to live in.

1)    Collaboration at individual and organization levels
People need to collaborate at individual levels using social media and internet. The collaboration between organizations (and countries of course) can also be encouraged. The three major focus areas should be world peace, education and culture (Soka Gakkai International, based in Japan works in these areas).

2)    Wisdom
Understanding the root causes of issues by increasing our wisdom levels will go a long way in creating a peaceful and prosperous world.  Knowledge puts us in the way of wisdom but wisdom is something experiential. Sandra Carey says, “Never mistake knowledge for wisdom. One helps you make a living, the other helps you make a life.” Japanese have a nice proverb differentiating knowledge and wisdom, “Knowledge without wisdom is a load of books, on the back of an ass.”

Wisdom will help us in understanding the root causes behind international conflicts and eliminating them. It will also help us to respond rather than react to situations. Wisdom will also discourage the abuse of power.

3)    Compassion
Developing empathy and trying to understand other person’s (or race) perspective is very critical. According to the Latin roots of the word, compassion means co-suffering, suffering with others, feeling the pain of others as if it was your pain. As the saying goes, “Kindness gives to other, Compassion knows no other.” Empathetic Listening is very critical to develop compassion. Rachel Also, if you put yourself in other person’s shoes, you will be able to understand their problems better and may be able to help by suggesting solutions.

Compassion will make rich countries (and their people) more generous towards their poorer counterparts. A genuine effort will be made to uplift and the approach with focus on hard negotiations will change to a more win-win approach.

4)    Courage
People need to gather courage to stand up against injustice and vested interests that divide and create rift. Merriam Webster’s Dictionary defines courage as, “mental or moral strength to venture, persevere and withstand danger, fear or difficulty. It also implies firmness of mind or will.” Letting go of fear contributes to our sanity and expands our consciousness as fear tends to hold us back, distorts our perceptions and reduces our faith.

Some politicians may have a tendency to divide people due to vested interests. People need to stand up against such efforts and discourage any actions which create further divides in society.


Conclusion
With these four simple tools, I am sure we will be on our way to co-create a peaceful and prosperous planet. The journey would be long and challenging but it is a much needed journey.