How We Created a Bestseller in Just Six Months?

Using Twitter and Other Tools for Book Marketing- A Success Story
“No matter how good intentions you may have, people look only at your presentations.

No matter how good presentations you may have, God looks only at your intentions”

Great marketing starts with a great product. A great product creates a pull and requires lesser selling efforts. Our first priority as authors was to give a great experience to our readers and create a reader friendly book. With team efforts, the first edition was sold within 6 months.

We used the following strategies to make the book an Amazon Bestseller:-

Creating a great product- The book is the first book by Indian authors on the topic. It has plenty of illustrations, cartoons, examples and case studies to make it easy to read as well as practical to apply. Renowned cartoonist Ismail Lahari, (Editorial Cartoonist, Dainik Bhaskar) has created the cartoons for the book. 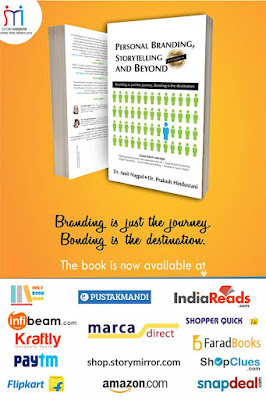 The book has several infographics and screenshots and is especially useful for creatives, introverts and professionals. It has dedicated chapters for doctors, journalists, social entrepreneurs, bureaucrats, women and so on. The back cover of the book has reviews by leading global storytellers viz. Jeff Rock, Dr Sally Fox and leading Indian blogger Shail Raghuvanshi. The Foreword to the book has been written by renowned agile leadership expert Jennifer Sertl based in New York.

The authors have tried to understand pain areas of various professionals and made an honest attempt to suggest practical solutions.

Online and offline distribution- The book has been well distributed on all prominent online platforms (Amazon, Flipkart, Snapdeal, Paytm, Just Dial and so on) as well as popular retail chains (and stores) such as Oxford. Team Story Mirror under the guidance of Devendra Jaiswal (Co-Founder and Head-Marketing) has done a great job.

Bulk buying by corporates- Many companies in the banking, IT, pharmaceutical, media and real estate sectors have purchased the book in bulk and distributed it to their top management.

Targeted marketing on Twitter- Twitter was extensively used to promote the book to those who are interested in personal branding and social media. Targeted marketing is one of the major advantages of digital marketing and we have been doing it successfully with Twitter.
Twitter handle

Facebook Page (and promoted posts)- The FB page was used to share visual content (quotable quotes) which were created by the publisher’s team. The best posts were boosted / promoted to the right target audience. We have received a very enthusiastic response from Facebook users.
Facebook Page

Blogs- Blogs were used to promote the book to relevant segments such as professionals, creatives and introverts. An attempt was made to co-relate the reader’s pain area with the book and how personal branding becomes a solution.
Personal Branding as an empowerment tool
Why Introverts are often misunderstood and what they can do about it?

Adding book title at the top of author profiles- The book title and the link to buy the book was added on the social media profiles of both the authors right at the top on LinkedIn, Twitter, Facebook, Quora, Google + and so on.

Personal gifting to celebrities- As co-author Dr Prakash Hindustani has been an award winning and renowned Hindi journalist for more than 3 decades, he gifted the copies of the book to celebrities from all walks of life including Lok Sabha Speaker Smt Sumitra Mahajan, CM of Chattisgarh Dr Raman Singh, lyricist Rahat Indori, cricket commentator Sushil Doshi, Governor of Harayana Kaptan Singh Solanki, and so on.

Blog reviews- The book has been reviewed by several prominent bloggers across India and some of the links of the book reviews are given below:-
Shruti Bhutani, Gurgaon 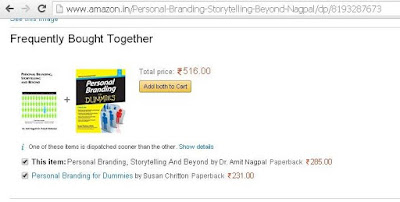 Challenging the leader(Dummies series)- On Amazon, lot of people were buying our book and the famous Dummies series book together. In one of their social media posts, the authors have directly challenged the leading book in the subject “Personal Branding for Dummies”. The readers were asked to buy both the books and compare which one was more relevant for the Indian or eastern cultures.

Amazon reviews- We have received very good reviews of the book and out of the 14 reviews received so far, 13 have rated the book as 5 star and only one person has rated it as 4 star (aggregating 4.9 stars).

International Reviews
The international reviews have started flowing in. The book is now available globally via amazon.com. 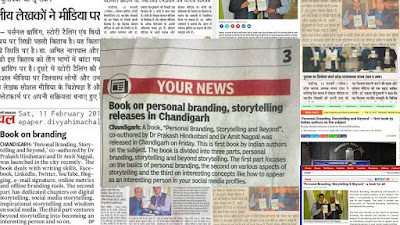 Author interviews on blogs and mass media- The authors were interviewed by several renowned bloggers and journalists.

Creating Mystery- Suspense is one of the most powerful storytelling tools. To create suspense, we added ‘Beyond” to the book title. Suspense makes reader wonder what's going to happen next, and that's why we named it-Personal Branding Storytelling and "Beyond" to create a mystery.

We would also like to thank all our friends and well wishers who have spread the word about the book and made it a bestseller.

The book has been co-authored by Dr Amit Nagpal and Dr Prakash Hindustani. It has been published by Story Mirror (Delhi/ Mumbai). It is divided into three parts viz. a) Personal Branding, b) Storytelling and c) Beyond Storytelling. The book also includes case study on PM Narendra Modi, Anand Mahindra and Steve Jobs.

How to use Linkedin to build a Powerful Personal Brand?

An Uncomfortable Soul- A Short Story

Once again she has started talking to herself. It’s her‘alone-time’ when thousands of thoughts are crossing her mind. All those questions that include ‘Why me?’and every situation that made her feel bad is flashing from the past.She has a bunch of people around her. Those people who have different mindsets, different goals, and different approach towards life.  May be she builds stronger bonds with lesser people. She is questioning herself, “Is it worth being here?”May be she doubts because,in this temporary world, she still believes in profound talks and eternal relationships. Not just her life revolves around building connections rather she believes in living them. People often perceive her as one with detached persona.But she is a human with reserved emotions who takes a while to truly open up.She hardly discusses her emotions except when she feels she has built a strong enough connection with a person. No doubt, socializing is a difficult task for her. An
Read more