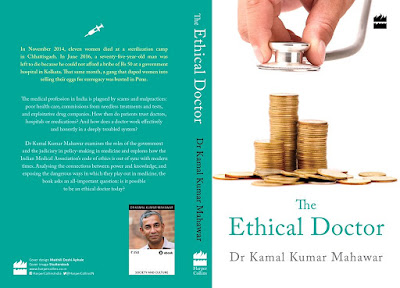 “Honesty and Ethics” are talk of the town (or India rather) these days after PM Modi’s surgical strike on black money. Corruption and dishonesty has gone into the roots of Indian systems and cleaning the system is not going to be an easy job. Yet PM Modi has demonstrated that when there is a strong will backed by action, nothing is impossible.

The book ‘The Ethical Doctor’ (by Dr Kamal Kumar Mahawar) also talks about cleaning and improvising the Indian medical system. The book has a fine balance between diagnosis and treatment. It goes into the details of what ails the Indian medical system and what actions are required to treat the system of its ills. Right in the author’s note in the beginning, Dr Kamal points out, “Declining values and corrupt practices are eating the heart of Indian society and its institutions. Doctors subscribe to the same value systems.”

Here are some of the key topics discussed in the book:-

Cuts and Commissions- The book takes a detailed look into the cuts and commissions, how they work and damage the system. The author points out, "Hospitals, laboratories and even doctors want the practice to come to an end. But nobody can do it in isolation" The question as usual remains, "Who will bell the cat?"

Avoidable tests/ treatments and role of Pharma & diagnostic equipment companies- The author points out, “Patients have little faith left in the doctors as stories of unethical and sometimes unlawful behavior abound.” Nothing shakes the patient confidence in the doctor as much as knowing that some tests have been conducted to squeeze money out of them. The author goes to the extent of suggesting that corporates need to be kept away from continuing medical education to prevent it from becoming a business.

Touts, Quacks and Exploitation of the poor- There are plenty of examples given by the author of how poor are the worst victims of the unethical elements in the system. Dr Kamal is brutally honest in pointing out, “We are producing armies of medical robots removed from the society they work in”. he empahsises on the need for open discussions and debates on social values and ethics in medical colleges. Besides issues like fake degrees, claims etc, the book rightly points out that we are training our doctors and nurses only to migrate to other countries.

Ills of the private and government hospitals- The book rightly points out that in modern societies, the role of the government needs to be enabling, empowering and monitoring people, institutions and markets rather than controlling them. The author actually pays a tribute to the doctors employed in government hospitals and says, “a heartfelt tribute o the sheer strength of character of the doctors and nurses who dedicate their lives to working in these institutions. They deserve to be accorded a stature no less than that conferred on those who stand at our country’s borders”

Regulation and the way forward- The author rightly points out that without significant investment of time and money by the government, it would be impossible to think of improving public health. Dr Kamal further suggests, “Transparency, accountability, effective complaint mechanisms and robust disciplinary procedures are some of the many things that will go some way in tacking systematic corruption in India.”

He rightly points out, “Currently there is something of an obsession in the media with trivia concerning politicians and celebrities. In a mature society, the kind that India aspires to be, this will need to change.” The book is an admission of a problem and an attempt at a collective discourse for a better tomorrow.